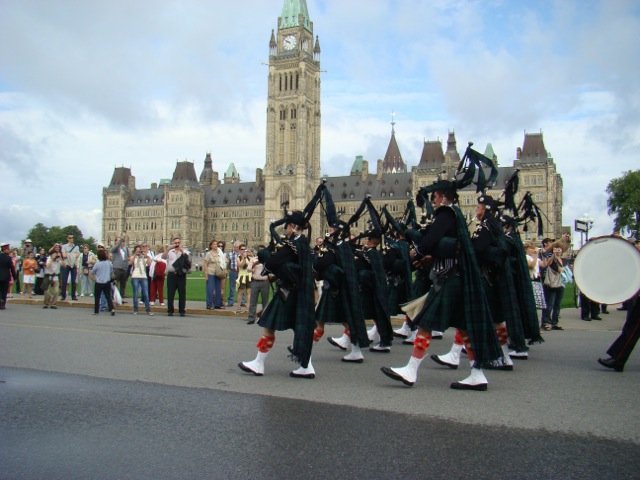 Musicians are a happy bunch and they work effectively together as a team.  When my daughter went to military boot camp as a reservist, her whole course was composed of musicians.  Their ultimate job was to perform in the Ceremonial Guard on Parliament Hill. But, as in every military trade, they had to be soldiers first.

The directing staff typically tries to break you early in the training, so the first thing they did was take away the recruits’ instruments, saying that they wouldn’t need them until they finished boot camp.  The recruits begged to keep them, as most of them had never gone a few days without playing, let alone six weeks!  Devastated without their instruments, the recruits “banded” together like no other group the directing staff had ever witnessed.  Their voices could not be locked away, so they polished their boots while singing a cappella.  The instructors were perplexed – they were used to infantry groups like themselves, not artistic types.

The recruits worked together as a team better than any other group. They were used to playing in an orchestra where everyone plays their part for the entire group to shine.  There is no hiding or shirking of duties in a skilled musical group, just dedication.  The learning curve for collaboration was nonexistent, it was just there.  They rooted for each other and helped each other.

The comraderie was unmistakable. When someone fell behind on the morning run, the instructors insisted that everyone backtrack to get them, all the while yelling at the slowpokes, saying that they made everyone else work harder.  The intent was to get the rest of the team annoyed with the ones who caused them the extra effort. However, to the instructors’ surprise, instead of getting upset with their fellow musicians, they cheered them on, telling them it was ok.  This happened not only in the physical training but whenever there was group punishment for the mistake of only a few.

From the first day, the recruits effectively followed authority because they had spent a good part of their lives dedicated to high-level musical performance, where the conductor was God.  If he or she said, “stop”, you stopped.  There was no whispering or any other distractions, only full attention, so no time was wasted when perfecting challenging music.  For typical recruits, listening was a skill learned after witnessing the consequences their peers suffered for inattention.

In small weapons training, the musicians got the best groupings (i.e. distances between shots on a target) of any of the courses. A big part of accuracy is controlling your breathing and focusing, which are skills that great musicians master.  Not only that, they were competitive and strived for perfection.  Stunned, the directing staff had a new respect for their unlikely military group.

On the last day, as the recruits completed their final task on a grueling obstacle course, the directing staff unlocked the instrument storage. And to the sound of bagpipes, the course returned to the shacks. Music to their ears!